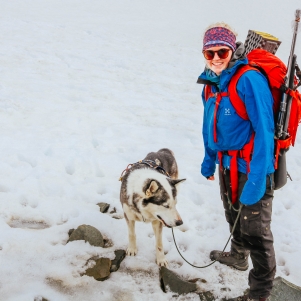 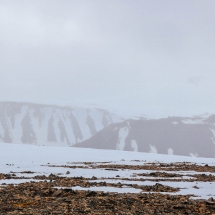 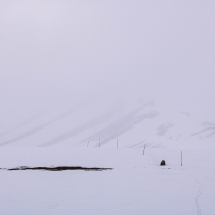 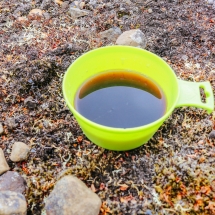 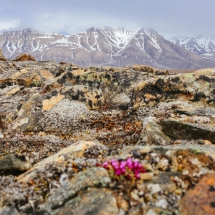 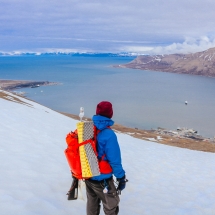 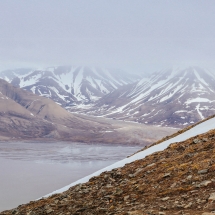 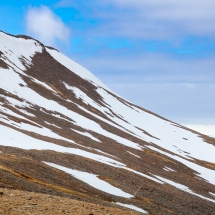 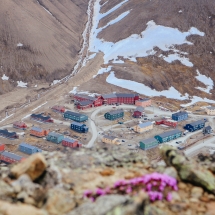 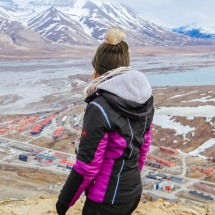 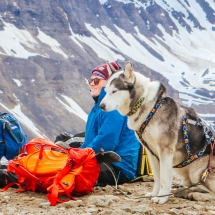 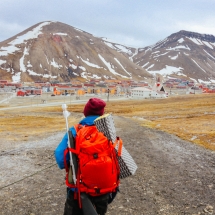 WHAT TO EXPECT FROM A SUMMER HIKING TRIP TO LONGYEARBYEN, SVALBARD

Vanessa from 'Snow in Tromso' explored Norway's northernmost archipelago on a hike to the surrounding mountains of its capital Longyearbyen.  Spoiler: she found snow!

May the journey begin

A Monday morning at 78 degrees North, halfway between the Norwegian mainland and the North Pole. The air is chilly, a mere 4 degrees, but due to the wind, it feels a lot closer to 0. The mountains are covered by fog and it’s drizzling. Looking at them, I can’t help myself worry about how cold it must be up there when it’s already so miserable down in the valley.

I would choose a hike in the mountains over a day in the office anytime but this morning, I’m not so sure. Is it even wise to climb a mountain when the view is so terrible and the weather that bad? I mean, we’re in polar bear territory and wouldn’t even be able to see one if there’d be one close by.

Our guide for the day arrives: Linn, a jolly student from Sweden who immediately dispels the widespread belief that women aren’t tough enough for the Arctic wilderness. “The weather is great today”, she says, “much better than last week where we had to cancel a hike”. I can’t help but wonder how bad the weather must become before it’s recognized as such by the locals too.

Time to get going!

We’re off. Linn leading the way with her rifle and Rafat, the husky, in tow. Both, the weapon and the husky are a protection against polar bears, who as Linn tells us, don’t roam the area very often. Except for 4 months earlier, when a mother bear and her cubs suddenly strolled through town and had to be chased away by a helicopter. Longyearbyen might be a town but it’s still wild for sure.

We make our way from Nybyen to the mountains, crossing a rapid of melted snow on the way. There’s still a lot of snow left to melt and soon we swap the gravel road to walk on snow and ice. 60% of the island of Svalbard is covered by glaciers and on our way, we pass Longyearbyen glacier where a group of researchers is working. The effects of climate change have been visible this far north for quite some time now and scientists believe that the glaciers could shrink by 85% should the warming of the earth’s atmosphere increase.

It’s started snowing – in mid-June! We’re halfway up the mountain and the climb becomes steeper and steeper. We have to put on chaps to prevent getting snow into our boots as we now wade through almost half a metre of snow. The views are spectacular – even if between gasping for air and getting snow in our face, it’s a little bit difficult to enjoy them…

We made it up the plateau, finally! The view is bad. You can barely make out the shape of the mountains in the distance. The landscape up here shows 50 shades of grey and white and it seems hard to distinguish the snow on the ground from the clouds in the sky.

We pass a memorial to honour a girl who was killed by a polar bear up here in the 1990s. Linn tells us that the girl was on a hike with a friend and the two didn’t think they would need a rifle. They saw what they believed was a reindeer in the distance but it turned out to be a polar bear. They did what you should never do when spotting a polar bear: try to run away from it. The atmosphere up here is eerie so we quickly continue our way across the plateau.

We’ve been hiking for around 3 hours now so it’s good to sit down and have a break. Linn thought of everything and brought tea and snacks. Even if we don’t feel very hungry, it’s good to provide your body with energy as we still have a long way to go to get back to town.

Svalbard is a polar desert meaning that vegetation is sparse. Upon first view, the archipelago might seem to consist of nothing but rocks and snow, but vegetation does exist – you just have to look close enough!

Civilization slowly comes back into sight and we have a great view on the harbour of Longyearbyen and the mountains of Nordre Isfjorden National Park. Svalbard is such a vast wilderness and we certainly feel quite small in this moment.

It’s not just the mountains surrounding Longyearbyen that are stunning – the nearby Adventdalen Valley is quite nice to look at as well and also, it’s full of history! The town’s airport was once situated there, though it could only be used during the winters because the ground isn’t hard enough in the summer.

When the German military arrived to Longyearbyen during WWII, they tried to use the airport in the summer against all warnings and of course, the plane crashed. As all signs of human traces are protected in Svalbard, parts of the plane still remain in the valley and will forever remind of the war.

The descent is quite steep and there’s still plenty of snow around in which we sink up to our knees from time to time. Walking isn’t possible anymore so we slide instead. It’s way more fun than the climb to the top for sure!

We made it down to the viewpoint at Platåfjellet. From here, you have a gorgeous view on the town of Longyearbyen from above. The houses down there look so tiny and it’s here where we realize how little space there really is available for buildings in the valley.

Longyearbyen has experienced an increase of population numbers in recent years but lacks space to build housing. Several parts of the town are already under threat to be destroyed by avalanches and landslides and when the weather is bad, especially in winter, people need to be evacuated from time to time until conditions improve.

We made it down to the viewpoint at Platåfjellet. From here, you have a gorgeous view on the town of Longyearbyen from above. The houses down there look so tiny and it’s here where we realize how little space there really is available for buildings in the valley.

Longyearbyen has experienced an increase of population numbers in recent years but lacks space to build housing. Several parts of the town are already under threat to be destroyed by avalanches and landslides and when the weather is bad, especially in winter, people need to be evacuated from time to time until conditions improve.

Longyearbyen is a wild place to live in and nature is everywhere! Seeing the place from above really made us feel so humble. It’s a feeling that is difficult to put into words

While we went from edge to edge to admire the vista and take pictures, Linn and Rafat took a well-deserved break with a view. Linn made sure to tell us everything she knows about Longyearbyen on our hike and we learned so much from her! Insider knowledge is vital when travelling in Svalbard as the locals know the different weather conditions and terrain best and also know how to act in case you meet a polar bear.

As the locals say, Svalbard is the kingdom of the polar bear so you have to respect the animals. In case of a sighting, you should make noise and try to scare the bear away by yelling or firing warning shots. To shoot a polar bear is only allowed as a very last resort if he comes closer than 30 metres and can’t be scared away.

We certainly were glad that we didn’t meet a polar bear. Seeing the Arctic nature and landscapes up close was an incredibly humbling experience and one we’ll never forget!

It’s back to civilization.

After 5 hours of hiking, we can definitely feel our feet and look forward to a shower and a hot meal. We’re passing the church of Longyearbyen, the old graveyard, and the remains of houses from before WWII. These too are protected and cannot be removed. The permafrost presses the remains up so that what’s left of the old buildings becomes more and more visible.