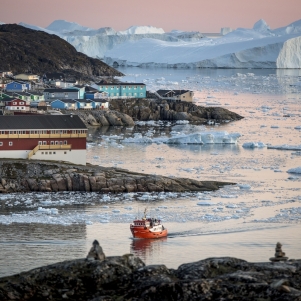 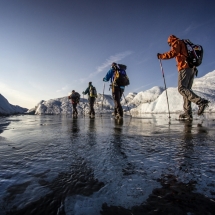 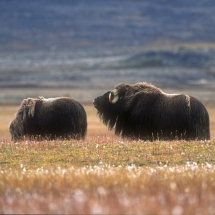 Why you should visit Greenland in 2016

In January Greenland was voted one of the top ten travel destinations of 2016 by Lonely Planet. Deservedly- so! Greenland is a place that is unlike any other destination you might have visited before. Being a country of extremes the untamed forces of nature shape the landscapes and lives of people living on the Arctic island. Once arrived in Greenland, your journey quickly turns off the beaten path. Here the view of majestic glaciers, jagged snow-capped mountains, icy rivers, vast tundra and rugged fjords lets every adventurer’s heart skip a beat. So why should Greenland find its spot on top of your 2016 travel list?

#1 Visiting Greenland will always feel like a pioneering experience

Greenland’s status as a place attracting pioneers, adventurers and explorers has remained unchanged since centuries. Even in 2016 century a time where nature’s hidden gems have become easily accessible through modern modes of transportation, Greenland has managed to maintain its mythical rawness. Still there are fjords which have not been named yet simply because they are far off the map and almost impossible to reach. Other places such as the fjord of eternity are a gateway to a world that can only be reached by boat. Be prepared to uncover nature’s best kept secrets by boat, helicopter, kayak or dog sled. Your exploration starts where the road ends.

There is nothing like the contrast between Nordic seasons. Whilst summer is short and temperatures remain mild, the intensity and vibrancy the rays of the midnight sun bring over the country remains unparalleled. Once summer is in full swing, the sun never sets and the energy of the sun seeps into every pore of your body. The outlandish feeling of strolling along the shores of a tiny harbour town in the mellow sunlight in the middle of the night will be a matchless experience.

Just like summer winter in Greenland is best described as an intense and dazzling experience. As the sun disappears the dim pinkish light of the polar night sets in. Instead of warming sunrays, the soul-stirring play of the Northern Lights takes over the unspoiled night skies. As Greenland is one of the most sparsely populated countries, your  view on the Aurora is pristine.

With a harmonic relationship to nature the Greenlandic culture cherishes the tastes of the Arctic. The traditional Greenlandic cuisine designed to provide proteins for the harsh winter season will tickle your taste buds with fresh salmon, Arctic Char and sweet lingoberries. If you dare to go out on the limb why not try the smoky flavour of the muskox.  As the sources of local food are sparse, you will witness a holistic processing of the marine and meat-heavy cuisine. Just like the country itself its food mirrors the strong ties between people and nature.

Greenland possesses a vibrant culture of handicraft and art, reflecting the respect  Greenlander’s have for the nature and wildlife their survival depends on. Being perfectly adapted to the challenges of the seasons Natives have refined the art of kayaking, hunting and survival under extreme conditions. Be inspired by a culture with extremely close ties to its natural environment.  As you get to know the friendly locals you will learn the knacks and tricks the island’s inhabitants use to sustain a living in a place that seems to be locked in eternal ice. Maybe by taking a sip of the (in)famously strong brew of Greenlandic coffee with a dash of whiskey.

As you travel through Greenland’s fascinating wilderness be sure to point the lens of your binoculars on both Greenland’s land and its waters. Both are home to many rare species which are perfectly adjusted to life under harsh conditions. Look out for the Arctic fox, the endemic muskox, or even the majestic polar bear on your land bound expeditions. Aboard of a vessel carefully pioneering through ice floats and calving glaciers you can watch out for seals, walruses or a polar bear hunting its prey.

Summer like winter the opportunities for outdoor activities are vast. Whether you’d like to venture through the vertigo-inducing ice sheets on an ice vessel, climb on top of a moraine or simply kayak along the shorelines of snow-capped mountains, the world is your oyster. However, there is one must-do: In a place where there are just as many huskies as humans, don’t miss out on the opportunity of putting your dog mushing skills to the test and being shown around by the four-legged locals.

Top up your Arctic experience with a dash of Icelandic volcanic fire or a touch of alpine Canada. As Greenland is comfortably tucked between Europe and North America, the island represents the perfect gateway for further travels to more Arctic adventures just a plane ride away.

Find your perfect holiday in Greenland