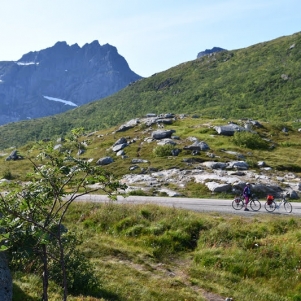 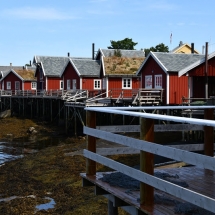 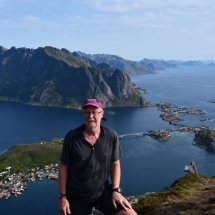 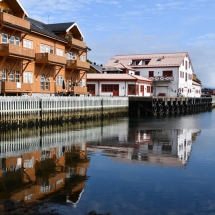 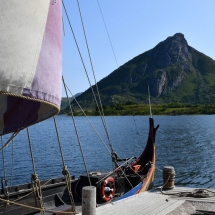 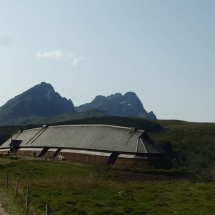 Lofoten in Lyrca : Cycling above the Arctic Circle

This summer our clients Richard and Nicole traveled from Australia to embrace an Arctic Cycle in the dramatic Lofoten Islands. In a guest blog they are sharing the details of their sun-soaked journey to Norway's scenic North. Now over to Richard....

It takes some time to get to north of the arctic circle but once you do you are rewarded with stunning scenery and endless light, well, in the summer at least. Our seven day self-guided cycle trip to explore the Lofoten Islands was structured as a one way journey from Svolvær to Moskenes .

We joined an international group of 16 people, with Spanish, Israeli, Swedish, Dutch, English, German and a couple of Aussies heading off to find our first night in a Rorbu. These are swished up old fishing cottages. The ride was 7km from the ferry port and back in Perth it seemed a bit odd to be planning to ride to the cabins at 9:00pm, but never fear with the sun setting at around midnight it was not a drama!

With shared cabins and group dinners, everyone soon got to know each other and shared their stories of the day and life in different places. By the end of the trip we had a WhatsApp group started and hopefully some of us will meet again on future trips to interesting places. The accommodation was in a mixture of Rorbu cabins in old fishing villages, modern villas next to one of the most northerly golf course in Europe and hotels in a working town. Buffet breakfasts are the order of the day in Norway. It was a challenge to decide between the beautifully presented cereals and pastries, the array of eggs cooked every which way; scrambled, boiled, fried or in omelettes, the sausage, bacon or just the smoked salmon and lovely nutty bread. All washed down with fruit juices, endless coffee and tea. It was hard to leave for the riding and not just keep eating! One fine tradition in Norway is the offer to fix a packed lunch from the breakfast buffet so what you missed for breaky you could easily take on the road. Teamed with a thermos flask you could stop anywhere for a break that had a great view, so pretty much anywhere!

The cycling was mostly flat, but a few modest ups and downs kept us honest and we did around 200km over the 7 days with very short days to top and tail the trip. The scenery could only be described as amazing. Dramatic mountains, coastal views with small and large islands, windswept beaches, small farms and more jumped at you from every turn in the road. The weather was perfect with little or no wind, daily maximums in the high teens, no rain and sunshine most days but never low cloud. The Norse gods were truly working for us.

Of course, with limited roads the cycling spent some time on the busy E10 but generally Norwegian drivers seemed very friendly and respectful. Some days quieter back roads were the order of the day while at other times there were options around tunnels on the “old road” that was now a cycle path.

We had hoped to get a day kayaking on part of the trip and we were not disappointed. We were able to book onto a three hour group paddle from the first Rorbu and headed out on calm seas in nice double kayaks with a minimum of fuss from the guide. Afternoon sun, no significant sea breeze or swell and a relaxed guide made for a good trip. Time in the gym helped and neither of us had any after effects of the paddling work and the memories of gliding past the coastal scenery will live long.

We took in a few other activities including a visit to a Viking museum with a replica chief’s house built alongside an archaeological dig that uncovered the site of the home of Olaf with Two Eyebrows. He was an important local Viking chief but when a bigger and badder chief from the south muscled in on his territory he decided to pack up his house and people and headed for Iceland. The house he built in Iceland is apparently still there and with some of the old timber salvaged from the Loftor house (there are no trees in Iceland hence the need to, literally, move house).

A good collection of artifacts from the dig, with fragments of glass and pottery but some well-preserved beads, pieces of gold and other items are also on display. They have been traced from places all across Europe, from Turkey to England. There is also a Viking ship which you can take a ride on, but it looked a bit odd with all the people lined up in bright red life jackets about to board a Viking sailing ship, so we did not take up the offer! The Lofoten is somewhat of a mecca for hiking. Richard managed to bag a couple summits near to our accommodation. Before breakfast with a quick trip up the Hoven near Hov and then on a “day off” he pulled off a 430m climb up the staircase that is the Reinebringen. Some bird’s eye views of coast were the reward along with slightly stiff legs for a day or two from the 1560 steps on the Reinebringen. Cycling touring in Norway is just as amazing as it sounds.

Richard and Nicole are based in Perth, Australia and have extensively traveled Europe and beyond. Follow their adventures on their own blog Fizzyrednews. Image rights belong to Richard and Nicole.