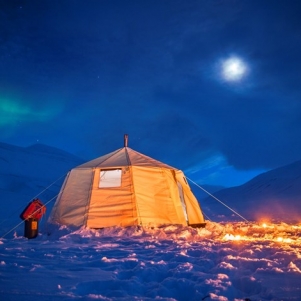 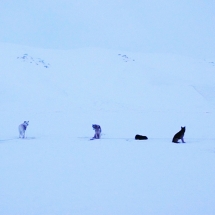 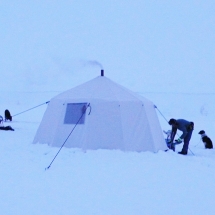 Guest blogger, Andrew Greenman (husband to Magnetic North's founder) recently travelled to distant Svalbard on a dog-sledding expedition holiday. Here he recounts the tale of an overnight tour which uncovers everything - from understanding the needs of a female husky dog to singing to the dogs at night and experiencing 'that moment' when dogs, humans and nature work in perfect harmony.

"Where we live in rural Leicestershire there are basically two types of people. Dog owners and the others. Magnetic North’s offices have a bring your dog to work policy but personally I’ve never owned a dog. It was a real adventure to find myself 1,300 km north of the Arctic Circle confronted with six Alaskan huskies who I was mushing during an overnight dog-sledding Safari with Magnetic North Travel and Basecamp Explorer. I travelled just after the dark Polar Night season in mid-February.

As I entered the kennels I kept telling myself everything would be fine. The first test was to locate my dogs, harness them and get ready to head off for an overnight camping in the wilderness. Luckily the dogs knew the score and helped me with the process. All bar one, Nuca. Each time I tried to harness her she jumped away and faced up to me. Confused and clearly struggling, an experienced hand informed me she didn’t like men and liked to be talked to. Ok. Talk to her. Be nice. Don’t get stressed. Don’t be a man. This didn’t work. Then it clicked. Maybe she wanted me to put the harness over her whilst facing her, rather than the more common technique of grabbing, pinning down with knees and putting the harness on from behind. Bingo. Nuca wanted to do it her way. The harness went on. Legs were pulled through and all six huskies were ready to go. First lesson learnt. These are intelligent creatures so control your inner chimp.

Soon we were off.  We were warned to stay in line and not to overtake. We were also warned that the trail was a bit icy and downhill to boot. The potential for falling off was pretty high which was made worse as the dogs were super excited to get going. I took off and quickly overtook the musher in front – whoops.  I was totally unprepared for how strong six huskies could be. Next lesson - learn to apply the brake.

After the initial shock things got a bit clearer. The dogs got into their stride and we mushed for a few kilometres before starting an ascent out of the valley and over a small mountain range. We climbed around 450m and I was still braking even uphill.

Lunch followed and provided a chance to thank the dogs and give them praise and encouragement. Next lesson – dogs, like people, warm to a coaching leadership style. As we finished lunch we entered a narrow ravine. A few minutes later the sun came out and the snow clouds dispersed.  We descended into a valley and the most amazing polar mountain vista unfolded before us. The next hour was magical. The dogs were running smoothly across fresh powder. The scenery was awe inspiring as we past mountain peaks and recent avalanches that made the snow look like a flowing river. Before long we were pulling to a halt as we reached camp.

As the darkness descended we unharnessed our dogs, connected them to a wire perimeter running around the camp and made them their dinner. Dogs always eat first. The perimeter provides an alarm in case a polar bear wanders into camp.  This didn’t happen. Was I disappointed not to see a polar bear. No but yes. As another guest noted Polar bears are one of those things you do and do not want to see. When you are outside in their realm you get a primal awareness of being prey. This is an uncomfortable sensation that connects you to how our ancestors must have felt long ago.

Having fed the dogs we were encouraged to pet them. One of the most surprising things for me was how these hard as nails dogs loved being petted and made a fuss of. I was clearly starting to go ‘doggy’ as I had learned most of their names and started to recognize different behaviours. How could I reward them I wondered? What about a song? No idea where that came from but I say in the dark, polar night singing a rendition of Rihanna’s Stay to some adoring dogs. It worked but I am glad I was not caught by the other mushers.

The next morning it was back to reality as I was handed a shovel and asked to clean up the dog shit to make a clean camp. This was pre-breakfast and pre-coffee. Dogs come first. After the camp was cleaned and dogs were fed, it was time to harness up and mush again. This time back up the valley and down a steep decline. I can only describe this as snowboarding downhill whilst attached to six dogs. Amazing. Still braking we headed back to the kennels completing a 50km adventure.

Back at Basecamp in Longyearbyen we sat around and reflected on the safari. The most commonly used term was amazing and an unforgettable time was had by all. It was physically demanding but that’s the point. It was a bit scary at times, but again that’s the point. And it did involve bonding with dogs, which is also the point.

The guides were incredible. Calm, knowledgeable, humorous and totally in control without micro-managing the experience. Our main musher, Kristina was an outstanding leader.

My lasting memory of my trip to Spitsbergen is the dogs. They made the trip. Learning about the art of mushing was an incredible privilege. It took me into close contact with an animal intelligence that is distant but still related to human thinking and action. There was a connection on some base animal level between us which is hard to articulate in words, but I felt it. I guess it explains why people keep dogs and create such strong affectionate bonds with them.  I read once that Captain Scott had to shoot his dogs and was left scarred by the experience. He was so moved he vowed never to work with dogs again a fateful decision and one I could never grasp. I can only imagine how awful it must have been but have a tiny insight into his reasoning.

Thank you Lincoln, Nuca, Moe, Dubai, ‘Little bitch’ and the quiet one whose name I kept forgetting (sorry). " AG