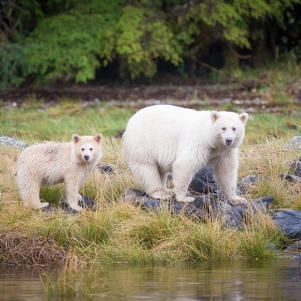 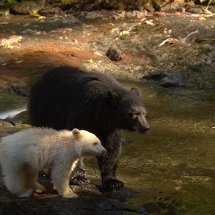 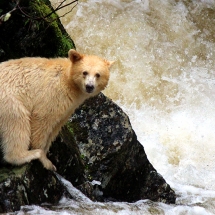 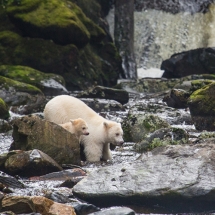 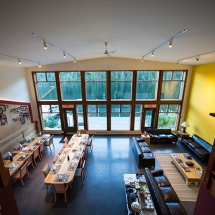 Bear watching: How to spot the Spirit Bear

At first sight, the Spirit Bear might look like a lost polar bear roaming the thick rainforests of BC, Canada. The white fur of the bear stands in a stark contrast to the green bushes and cedar trees of the coastal region. A closer inspection of the unusual bear reveals a much smaller size compared to the Arctic icon. And if you were to look even closer (something we wouldn't necessarily recommend!) you’d find that bear has almost cream coloured fur.  So if not from the Arctic where does the strangely coloured bear come from? This conundrum has been the fabric of many legends and subject to many scientific dissertations.

To the First Nations, the bear is a sacred source of inspiration, deeply embedded into their ancestral stories. Legend has it that the Spirit Bear has been roaming the lands when it was still locked in glacial ice. During these days, the human struggle for survival in the icy nature was much greater, food was scarce and the freezing temperatures were relentless. As the glaciers receded and green forests took the place of the frozen, infertile grounds, the Spirit Bear remained. Its white fur serves as a reminder of the cold days and should inspire gratitude and appreciation for the lush nature.

Though not quite as mythical, but equally fascinating, scientific research has revealed that the near white bear is, in fact, a black bear. The sub-species of the black bear population possesses a rare recessive gene which results in a white to cream coloured fur. The bear, however, is not considered an albino. For the fur to occur, two black bears carrying the same gene have to mate. Therefore it is possible that two black bears might give birth to white cubs. Research has revealed that every 10th black bear in the BC rainforests is believed to be a spirit bear.

Where to find them

As the bear’s territory spans across a relatively well-defined area within BC's coastal rainforest, chances of seeing the bear are reasonable. Seeing the bear is often described as a magical, humbling experience and should therefore not be taken for granted. To ensure conservation and to increase viewing probability, guides and wilderness lodges are tracking the moving patterns of the bear. Join these experienced guides with intimate knowledge of the behaviour and movement patterns of the bears at Spirit Bear Lodge. Prepare to be adventurous with an ever-changing itinerary. Guides will decide the best destination and form of transport to view the beautiful bears, a decision that may only be made that very morning.

How to make it happen:

Visit the spectacular Spirit Bear Lodge for the best opportunity to view this mythical creature. The lodge works closely with the local First Nations as well as nature conservation authorities to protect the bear, they feel so strongly about. (Learn more about the happy moments of host Tim here) At first, you’ll follow the tracks of the bear water taxi, zodiac or paddling on a canoe or kayak. Once you’ve reached land your guides who provide viewing equipment and expertise will direct you to the bear based on their latest tracking data.

This trip has flexible departure dates and is subject to availability. As your viewing chances of the bear are largely dependent on the bear’s schedule we’d recommend travelling in between early and late summer.

How to get there:

Your trip to the Spirit Bear Lodge requires a flight to Vancouver, followed by a flight to Bella Bella and a boat transfer will take to this truly remote lodge. This trip is a genuine escape into the wild!